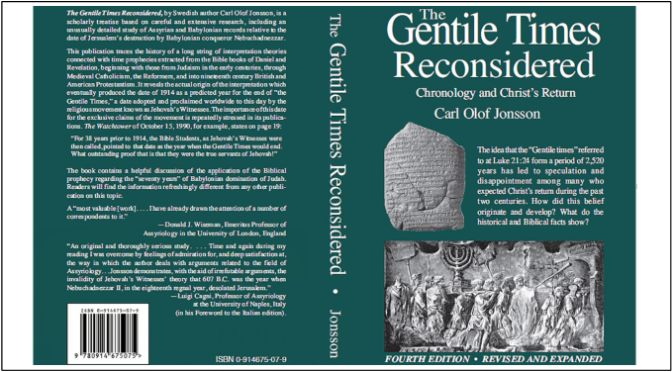 This book proved to be one of most important single sources of research on the subject of chronology that anyone had ever asked the Watch Tower Society to evaluate. The book consolidates the most salient arguments about the pivotal year, 607 BCE, and produces insurmountable evidence against the claims made for it. But the book goes much further. Many have found it to be an important work because it opens up readers to a very tangible world of facts and evidence that most of us, as Witnesses, would have thought nebulous and unreachable.

This most recent edition includes a discussion of several of the the letters between Carl and various “anonymous” members of the Watch Tower staff including members of the Governing Body.

The book is available on the site managed by Carl at the following link: http://kristenfrihet.se/english/gtr4/contents.htm .

BONUSES   (from Carl Olof Jonsson; links are to his website)

Some additional articles about chronology

(For even more materials and more recent updates, please visit the site directly.)

Those who have read works by Rolf Furuli may also be interested in several articles on Jonsson’s site that expose the failures and contradictions of Rolf Furuli’s  attempts to propose a chronology that would defend the Watch Tower’s chronology claims.

The amount of work and energy that Carl Olof Jonsson has expended in this research has culminated in works that are unparalleled in their ability to help Jehovah’s Witnesses understand the linchpins of their chronology doctrines. Those who know Carl and have spoken to him will know he is a modest man who desires no notoriety or commendation. No one can doubt the value of his work, however.