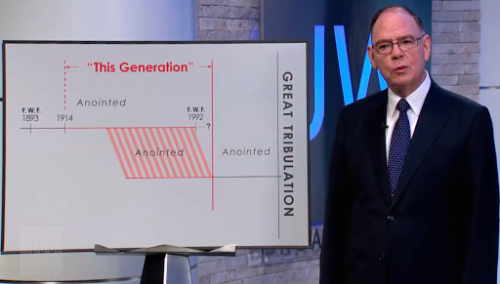 The Watch Tower Society has got some “Splane-ing” to do. So they brought out Brother David Splane, hoping to bring some credibility to the incredible. (It’s in the September 2015 Monthly Broadcast at tv.jw.org.)

It is now literally possible to explain the potential length of the “overlapping generation” with a formula like the following one where X′ and X″ represent two different (overlapping) groups of anointed persons.

This formula is applicable where A′ and A″ are symbols referring to anointed persons qualified to be in group one and two, respectively. λ[A′] (lambda of A′) refers to the lifespan of the person in the first group, and α[A′] (alpha of A′) refers to the age at which A′ is said to have been anointed. A person qualifying for inclusion in the second group (A″), must not only be born, but must already be anointed, in or before the year A′ dies. We must also consider the following two limiting factors: First, the maximum length of a lifespan (λ) usually put in a range from 99 to 119 years. Second, the minimum age at which one may be considered to be anointed (α), put in a range from 10 to 20 years. And, finally, we must subtract x, the number of full years that the lifespan of A′ overlapped with A″. If A″ happened to be born in the same year that A′ died, then this x=0.

If we plug in the information for FWF (Frederick W Franz) as a case that fits the first group of anointed, we would get:

We would now only need to assume a lifespan and an age of anointing for a person who qualifies to be in the second group. If we also assume that A″ also has a lifespan of 99 years and also has an anointing age of 20, and was born in 1992, then the formula could be filled in as follows:

Of course, we could also assume that FWF was not the ideal candidate to maximize the length of the generation. Perhaps there was a person, born in 1904, and anointed at 10 years old who also lived to be 119 years old. It doesn’t seem likely, of course, but it’s potentially possible. Perhaps it’s even more possible in the second group when medical advances of the 21st century might increase more lifespans toward and perhaps beyond the 119 year limit.

We could then, plug in our maximized examples for both groups and get the following numbers in our formula

Of course, there are also ways to evaluate this from a Biblical perspective. We can discuss, for example:

If 1 can equal 10, perhaps this actually meant 100 generations!