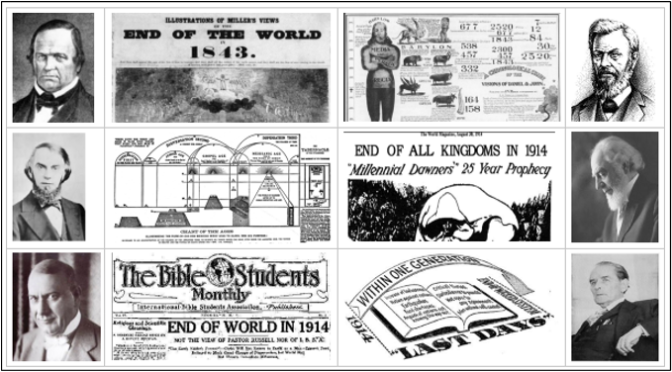 A 100-YEAR ANNIVERSARY is usually something to take pride in — something to celebrate! And, yes, the 100-year milestone of the 1914 date truly is something to celebrate. But not for the same reasons that the majority of Jehovah’s Witnesses are giving special attention to the date. We’ll explain the reasons we are celebrating, of course. But first, some background:

“THIS IS THE YEAR OF THE KINGDOM”

And now, in 2014, the Watchtower celebrates the 100-year anniversary of 1914. A phrase that has been heard multiple times among Jehovah’s Witnesses from their headquarters (Bethel) is that 2014 is “The Year of the Kingdom.”

The following links (to jw.org) are examples of this kind of emphasis since the beginning of 2014.

THE TRUTH BE TOLD

It should become clear to anyone who spends much time looking at the research that has been reproduced, referenced and presented on these pages that the 1914 teaching was simply a mistake. So exactly why would we celebrate? Are we gloating?

For most of us, we are happy with the demise of the 1914 teaching because it corrects an error. And correcting an error is always a good thing.

Researching and studying about 1914 was, in fact, quite painful at first for some of those whose experience are available here. But it was a step to real progress. Many of us now have a much better understanding of the Bible, and we are now more conscious of our spiritual needs. We feel more empathy and better understand one another, especially those who, like ourselves, had found ourselves defending belief systems that required continual change and correction over time. And this empathy has often included our own families, friends and loved ones. For many of us, it was specifically the deep and sincere research into the 1914 doctrine that ultimately produced the proper humility that allowed us to make greater progress in our continued quest for truth.

A MILESTONE OR A MILLSTONE?

But wait! Aren’t we getting ahead of ourselves? Many readers of this article will surely think that the Watchtower’s celebration of this 100th Anniversary is just evidence that the 1914 teaching is not going away any time soon. Why are we acting like this anniversary is somehow a “death knell” for the Watchtower’s traditional 1914 doctrine?

There are plenty of reasons:

Any JW who has ever tried to seriously defend the 1914 doctrine has likely already discovered that there is no Biblical or secular evidence for pointing to that specific date. Worse than that, there are dozens of lines of evidence against it. (If you get to the level of studying the pivotal 607 BCE date, it turns out that there are literally tens of thousands of pieces of evidence against it. We might have thought that date was set in stone, and as it turns out, the very stones [link] cry out against it.) Every single claim about the doctrine turns out to be problematic from a doctrinal perspective. Defending it creates insurmountable contradictions, and this is something that many Witnesses have had to keep to themselves.

But the Watch Tower publications have 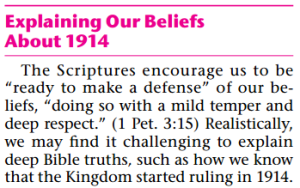 now asked Jehovah’s Witnesses to focus on 1914 one more time, and to try to defend it one more time. The October 2014 Our Kingdom Ministry states: “Realistically, we may find it challenging to explain deep Bible truths, such as how we know that the Kingdom started ruling in 1914.”

Most, but not all, Jehovah’s Witnesses who write for the Watch Tower publications believe the 1914 teaching, and some “cracks” have already showing up in the publications.

Even for those who still believe it, however, the renewed focus has clearly created some awkward discoveries. Claims that once appeared regularly in Watch Tower publications have almost disappeared, replaced with reworded claims that make it clear the writer discovered the problem with old claim.  Even some of the more recent doctrinal changes in just the last couple of years provide additional indications that Watch Tower writers have begun to see how the doctrine creates contradictions.

Luke 9:21 indicates the perils for a “man who has put his hand to a plow and looks at the things behind.” If you’ve ever tried to plow (or mow a lawn, at least) while continually looking back at where you’ve been, you will find that the lines aren’t straight. The Watch Tower’s own writers are looking back and finding out that the lines aren’t straight.

Most of us, whether JWs, ex-JWs, or non-JWs, already understand implicitly that the current 1914 teaching can’t last forever with world conditions going as they have been for the last hundred years. The teaching has already required adjustment in several ways, and it would be impossible to continue the current teaching without additional changes in the next couple of decades. The doctrine is like a sinking millstone. It can’t remain afloat.

KEEP ON TWEAKING FIRST THE KINGDOM

If anyone isn’t up-to-date with some of these more recent changes to the “generation” doctrine, it’s also discussed here.

A decade before the most recent changes to the “generation” the January 1, 2000 Watchtower stated:

“In recent years, we have been encouraged to look again with deeper understanding at—among other things—the generation that will not pass away before the end comes…. It may be difficult at times to understand such updated explanations, but the reasons for them become clear in due course.” [emphasis added]

In due course, of course, the definition of that “generation” changed again. There was an explanation that worked up until 1995, and then the 1995 explanation that was considered potentially “difficult” in the quote above, which itself preceded a new explanation in 2008, which lasted only a couple of years before the currently accepted explanation first appeared in 2010. Historically, the Watchtower has offered 7 distinct explanations, as depicted in the graphic below, found at the following web address: http://www.jwfacts.com/watchtower/generation.php

As already stated, one excellent reason for our celebration is simply “pleasure in truth.” Jehovah’s Witnesses are repeatedly encouraged to do as the Beroeans did:

“Now these [Beroeans] were more noble-minded than those in Thessalonica, for they accepted the word with the greatest eagerness of mind, carefully examining the Scriptures daily to see whether these things were so.” — Acts 17:11

As if to drive home the point even further, Paul later wrote to those in Thessalonica, telling them to “make sure of all things.” (1 Thessalonians 5:21)

That desire — that pleasure, that eagerness of mind — to “carefully examine” and “make sure” will be clear to anyone looking at those many experiences that many have shared here on this site. And if you have never seen Carl Olof Jonsson’s most comprehensive book, Gentile Times Reconsidered, take a quick look at the book here and you will surely be impressed at the level of research and scholarship.

CENSURED SENTRIES OF THE CENTURY

There’s another good reason to celebrate, and it’s in a more serious vein. We are all aware of how the Watchtower magazine often “celebrates” the lives of those persons in history who sacrificed much for the sake of truth and for the sake of their faith.

It’s a common theme found in many Watchtower articles — one that truly touches the hearts of those who have given up so much for their faith, their conscience, and especially for those related to them in the faith. That same theme was recently highlighted in the June 1, 2014 Watchtower article: Three 16th-Century Truth Seekers—What Did They Find? (links to jw.org) Another recent example is found the April 1, 2014 issue: Thomas Emlyn—Blasphemer or Advocate of Truth? (links to jw.org)

The parallels between experiences posted on this site and “16th-Century Truth Seekers” will likely seem quite unexpected to many Witnesses. We’ve included a short post about the Watchtower’s article on Thomas Emlyn, for example, because the similarities to the experience of Witnesses who studied the 1914 teaching are really quite amazing.

HOW WE ARE CELEBRATING

Truth doesn’t always lead to peace, but where both sides give truth a chance, it can offer the most stable basis for peace, understanding, empathy and love. Who could ask for anything more?