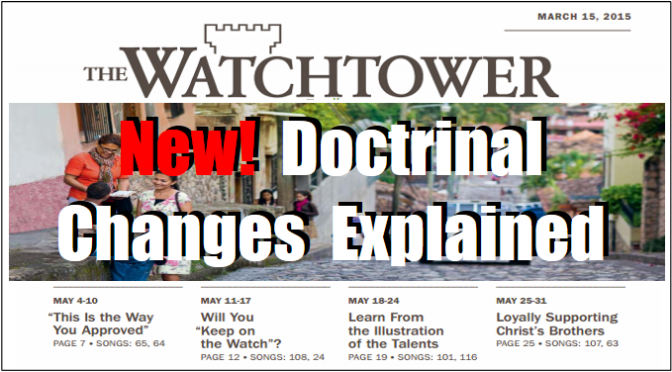 Articles in this series:

There are a some specific doctrinal changes spelled out in the March 15, 2015 Watchtower (the “Study Edition” available on the JW.ORG website).  But the biggest, most important change is about a method for explaining Scripture that will affect many more doctrines than the specific examples mentioned in the magazine.

With this issue, literally thousands of pages of previously printed doctrinal material are rendered obsolete. It also sets a new direction for Bible commentary in The Watchtower that has the potential to completely “reset” SEVERAL of the unique doctrines of Jehovah’s Witnesses, and MOST of the prophetic interpretations. Even the chronological interpretations are at risk of becoming obsolete.  (For example, until the last decade, “1918” was taught as a prophetically significant date that was once mentioned just about as often as 1919 was mentioned. Yet, many JWs are not even aware that 1918 has already been quietly dropped as a prophetically significant date, for reasons that are aligned with the changes set forth in this March 15, 2015 issue.)

To get an idea of how sweeping the general change already is, you would have to know just how much prior doctrine is affected by these sentences from the March 15th Watchtower:

“In times past, it was more common for our literature to take what might be called a type-antitype approach to Scriptural accounts.” (p.3) “Humans cannot know which Bible accounts are shadows of things to come and which are not. The clearest course is this: Where the Scriptures teach that an individual, an event, or an object is typical of something else, we accept it as such. Otherwise, we ought to be reluctant to assign an antitypical application to a certain person or account if there is no specific Scriptural basis for doing so.” (p.18)

The following is a list of 42 of these “prophecies” or “prophetic dramas” found in one of the Watchtower publications that we (JWs) actively taught and studied when I was a younger Witness. Most of these have never been dismissed and they still represented accurate doctrine until now. Learning these teachings took up a large portion of the curriculum for the students of the Watchtower Bible School of Gilead while I was at Bethel from 1976 to 1980. One of the weekly meetings, the “Congregation Book Study,” was often devoted entirely to discussions of this type. 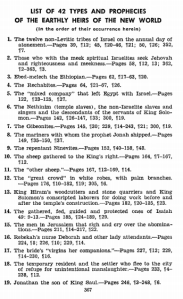 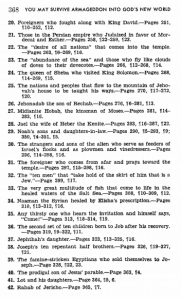 Also note that the 42 examples listed only include those that specified the “great crowd” who would have an earthly hope instead of the “anointed” with the heavenly hope. Because these “prophetic dramas” have been emphasized less, especially in the last couple of decades, many Witnesses didn’t realize that most of these explanations were still “on the books.” In other words they were still considered valid, correct doctrines. At least until now.

DIDN’T THEY TRY THIS BEFORE?

It probably sounds like hyperbole to attach such a potential significance to these new changes. However, we have an excellent reason to believe that these changes are indicative of more changes underway. What’s that reason? Simple. We saw what happened when they tried this before. The Watch Tower Society didn’t try it officially, because not everyone was on board with it. Nevertheless, beginning in the late 1960’s and 1970’s, several members of the Writing Department were already reading Bible narratives and writing and teaching about their meaning in the exact way described in this new issue of the Watchtower.

In fact, the idea of changing this teaching method already came up during the research and writing of the Watch Tower’s first Bible dictionary, Aid to Bible Understanding, completed in 1971. This “Aid Book” as we called it (now slightly revised as Insight on the Scriptures) is nearly devoid of types and antitypes. By 1972, the research behind the Aid Book had already resulted in major changes to the Watch Tower organizational structure, including a re-definition of what the governing body would soon become, and the new “elder arrangement,” which was just being put into place. The following is from an article in the August 15, 1972 Watchtower that reflects some of the thinking on this subject at the time:

*** w72 8/15 p. 502 God Readjusts the Thinking of His People ***
Another thing that has given rise to questions is the use by Jehovah’s witnesses of parallels or prophetic types, applying these to circumstances and to groups or classes of people today. Many people who read the Bible view its accounts all as simply history, but when they begin to study with Jehovah’s witnesses a readjustment of viewpoint takes place as they see that there is more to the accounts than history. …

The question that is sometimes asked is, Did Jehovah stage that ‘dramatic’ event, so that we would have a warning now? Well, would he cause such bad things to happen? Would he maneuver them himself? No. …

It helps us to understand more fully when we keep in mind that the people in ancient times were real, living their daily lives in association with their families and fellowmen, having hopes and desires as we do today, the same general problems with sin working in their members, and many of them faithfully waging a fine fight to serve God.

The article just quoted actually tried to play both sides of the issue in order to introduce the change but also dismiss the need to make too many changes at once. (The 1972 article tended to favor the “type-antitype” status quo.) During the late 1970’s, the brothers in Writing who were the most productive and who were the most capable of Biblical research included the brothers who had worked on the Aid Book, and by that point in time had already been getting assignments to write Watchtower articles on many Bible topics. These articles tended to minimize the “type-antitype” pattern.

Not all Watchtower writers agreed with this change. However, many letters were received that thanked the Watchtower Society for producing these “refreshing and clear” articles that “make it easier to apply the Bible in our daily lives as Jehovah’s Christian witnesses.”

The brothers in Writing who had helped with the Aid Book had become especially involved in those new articles with the “refreshing” style, as some called it. One of these brothers had an excellent knowledge of the Biblical languages, including not just Hebrew but also Aramaic and Syriac. Another other one could write an article in minutes on almost any Bible topic, pretty much from memory, and those articles could usually be used in the Watchtower without any edits or changes. Their work was approved through the appropriate review committee(s), including Governing Body members, and resulted in dozens of Watchtower articles, and several books, which are still easily identifiable by their style when looking through the bound volumes of the Watchtower from those years, or the Watchtower Library CD. Two books were written in this same “refreshing” style in a Bible commentary format. Those two books, Commentary on the Letter of James and Choosing the Best Way of Life (which was a commentary on 1st and 2nd Peter) were released at the summer District Assemblies in 1979. They became the first major examples of books that scrupulously avoided “type-antitype” patterns, even when touching upon subjects that had previously required it. This includes an “untypical” reference to the “faithful and discreet slave” that called upon all Christians to be this sort of person. A recently deceased brother who had been at Bethel during the period described it to Randall Watters like this:

“There were a couple new books published that were nothing like the typical FWFranzesque prophetic calculus manuals. These books were not typical fare, and you could see the puzzled looks when they reached the book study groups and meetings. Biblical commentary within scriptural context…”

Unfortunately, the Watch Tower Society in general was not yet ready for this type of reading and writing about the Bible narratives. “Heads rolled” when the significance of those changes was noticed by “old school” supporters of these now obsolete doctrinal methods. This included the two mentioned above, and a few others, too, who were not disfellowshipped, but who were dismissed from Bethel. However, this March 15, 2015 issue of The Watchtower now renders that “old school” doctrinal pattern obsolete. The pattern utilized in the Aid Book and in subsequent Watchtower articles and books for the next 7 years, especially from 1976 through 1980 is now considered ‘the way Jehovah approved.’ (Watchtower 3/15/2015 p.7,8)

While we cannot vouch for the exact numerical claims in the quote below, one person has put it this way, on a site where JWs often discuss issues with other JWs:

Now, with this article, nearly half the Watchtower articles that Rutherford wrote (since about 1931) and about a quarter of the Watchtower study articles that Fred Franz wrote (since 1942 – under Knorr) have been downgraded. When I worked with the Gilead students we were still spending about half their time going over these old Bible stories to make sure they understood when the anointed class was meant and when the great crowd was meant. (Anyone who has a copy of the Gilead Notes from up to about 1980 will know what I mean.)

Historically, I find that very interesting, but from a progressive perspective, it was bound to happen now that there is less concern about distinguishing anointed from other sheep, I find it quite refreshing that we no longer need to be worried that we draw the right application to the various people in so many of these Bible accounts.

If you do not have the magazine in printed format, it is available at the following location on jw.org:

That link (on the JW.org site) displays a page that has the following articles listed. Over the next few weeks we will provide a commentary on each of them and link the titles to our commented versions of these articles.

“This Is the Way You Approved”

Why have our publications in recent years often given simpler, clearer explanations of some Bible accounts?

Will You “Keep on the Watch”?

Read this clarified understanding of Jesus’ parable of the ten virgins, which focuses on the parable’s simple, urgent message.

In the past, our publications often mentioned types and antitypes, but in recent years they have seldom done so. Why is that?

Learn From the Illustration of the Talents

This article refines our understanding of the parable of the talents.

How do those whom Christ judges to be sheep support his brothers?

Watch for the following subjects to be covered across the five articles: